Look at Albion Online the Destiny Board

Albion’s method of progression isn’t based on levels, but rather achievements. These are handled through a system that is called the “Destiny Board,” which shows how to move to higher tiers of gear and crafts, as well as the exact path that needs to be taken to achieve the things you want. This gives a very open feel to the game, while at the same time allowing a somewhat clear-cut path (despite being vastly different from one player to another). There is really no right or wrong way to go through it – simply find what you want to work towards first, and go do it.

Across the bottom of the screen is the current achievement progress. Look at the screenshot below for an example. 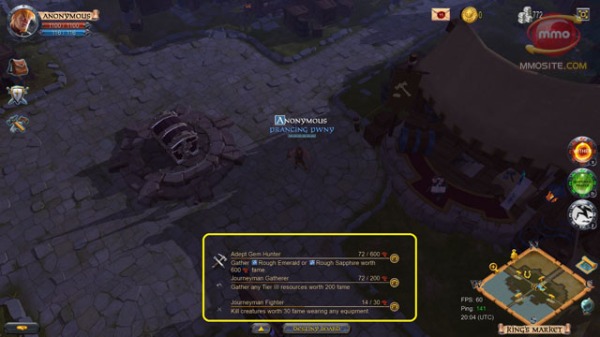 This makes it quick and easy to see the progress you’ve made on three separate achievements, and you can disable their tracking if there’s one you just don’t want to do. Note that it tracks based on the latest one you have added progress towards. For example, killing a creature would put the Journeyman Fighter tracker on the top of my listing. And then mining an ore would bring the Journeyman Gatherer one back to the top again. This helps further organize things by letting you see what you are actively working towards, without necessarily having to keep organizing them on your own.

If you want to take the easiest method of doing the achievements, just work on whatever is in that list at the bottom of the screen. As one is completed, another will take its place, creating a revolving door of things to do. In all actuality, you never even have to take a look at the full Destiny Board unless you want to see what is coming next, what you have already achieved and what bonuses were unlocked (or are going to be soon).

The Destiny Board Screen

Once you get into the Destiny Board, you will see a very large area with a lot of interconnected spaces. Each of these is a different achievement, with its very own requirements and rewards. If you scroll all the way down to the bottom of this screen, you will see the yellow spots going northbound. This is where you started out when entering the game for the first time. It isn’t until you get to the very center of the board that you can start unlocking other achievements.

Really, this beginning area is simply the learning phase. So while it may seem like a lot of work to get to the unlocking area, it isn’t. After just a few minutes of playing, you will already have it all ready to go and open for exploring!

Viewing unlocked achievements is as easy as clicking one of them that is already colored in. This will show the name of it, that it’s completed, and will also give a listing of the rewards that were unlocked as part of it. For example, in the one below, the ability to both craft and use Novice items (gear and buildings) were unlocked. The downside to this system is that you can not view what it took to unlock each achievement. So once one has been completed, you can’t look back to see what you actually did to make it happen.

While the listing at the bottom of the screen in normal play will show progression through some achievements, they don’t tell what you are actually working for. This can be done in the Destiny Board, by clicking on one of the achievements that have already been started. As an example, the one below tells the name, that it’s in progress, that I’m about 15% of the way finished with it, and that completing it will unlock the ability to create and use Adept’s items (mounts, buildings and accessories). Considering this is the set of gear I am currently needing to make, this is what I need to work on before doing anything else so I can get it knocked out and move forward with the ability to make other gear sets.

In most games, achievements are just a form of bragging rights. They allow players to show off what they have completed, and they give a sense of accomplishment. Along with this, they also keep drawing players in, since they give a pretty big challenge. With Albion, however, the achievement system is also the method of progression. Everything in it deals with things that are done through normal game play, and they represent both necessary actions and optional ones. They allow each player to choose their own path through the game, working as fast or as slow as they please. And due to the way they work, players that want to experience all the game has to offer have no choice but to do a lot of achievements and explore game areas they might otherwise never touch. This puts Albion is a very unique space, in that it opens the doors for choices, while at the same time forcing certain gaming styles on its players. And one thing is for certain: this is a completely different way of handling progression than other games use.